“We should really go to the Beaumont Hamel ceremony. A hundred years,” Jill said.

“I hate that place.”

“What I don’t get is how someone managed to take a symbol, an image of something, a structure with such meager and humble beginnings, and used that as a template to build that gaudy monolith of pretension.”

“What are you talking about?”

“That building. Fuck. It’s supposed to look like fishing rooms. It looks ridiculous. Every picture you see of St. John’s includes that goddamn eyesore.”

“Is this kind of like the Ice Caps thing?”

“That’s a stupid fucking name for a hockey team and you know it.”

“Okay. Well, I still think we should go to the ceremony. It’s just up the hill.”

Tyler went to the garden hose and began dragging it toward the kiddie pool. “Fuck that,” he said. “I’m priming up right here. What time does the show start?”

“Nine hours of enjoying my freedom like a patriot,” he said, hauling off his shirt. It was warm already, at 10 a.m.

Jill considered heading to The Rooms without Tyler but the thought of standing in that crowd by herself made it easy to concede. She went inside and found a live feed of the ceremony on CBC. There was a children’s choir, young men dressed like the fallen soldiers, there was a Newfoundland dog. She watched it on the couch while eating a bowl of blueberries.

A lost generation. She tried to imagine if she and Tyler had lived a hundred years ago; how would that have gone? Tyler, she figured, would’ve been dishonorably discharged before leaving Pleasantville (though she wasn’t sure if Pleasantville existed back then). The only authority Tyler honoured was his own. Which was fine enough. These days. Jill could describe him as self-possessed. Rebellious even. But watching and listening to stories about young men being mowed down in waves, sent to certain death carrying 30kg packs across an open field, exposed to machine gun fire, she couldn’t help but think about Tyler’s privilege. And her own. They’d spent their late teens and early 20s nuzzled by academia. Civil servitude was their worst-case scenario. No one would ask them to die for their country, or for someone else’s.

Jill watched the ceremony for less than 30 minutes before she got bored enough to go into their bedroom and change into her blue bathing suit. Through the bedroom’s open window she heard voices in the backyard. She stood on her tiptoes and smudged her nose against the bug screen to peer out. She saw Tyler, sitting in the kiddie pool, looking up and listening to Greg, who, along with his wife Sharleen, was dressed head to toe in red and white.

“Hey, Jill,” they said together.

“Jill, grab a beer for Greg will ya?” Tyler said over his shoulder. “Sharleen, you want one too?”

Sharleen shook her head, no.

“Greg knows where the fridge is,” Jill said, dipping her feet into the pool and gingerly sitting down, pulling the sunglasses from the top of her head onto her face. She looked over top of them at Tyler with an expression that said Don’t be a jerk.

“Right on,” Tyler said, fiddling with a loose thread on his trunks.

Tyler and Jill lived on Suvla Street and shared a backyard fence with Greg and Sharleen, who lived on Suez. After the red and white couple slid through a gap in the fence and were out of sight Tyler turned to Jill. “Where’d you go?”

“I was watching the ceremony.”

“They televised that?” he said.

“I suppose all the local celebrities were there? Let me guess, the weatherman, a few townie musicians, a few MHAs?”

“Pretty much,” Jill said, scooping a dead bee out of the pool.

“Good ceremony or what?”

“It was. It was pretty powerful, thinking about all those men – those boys – who died. Made me thankful that we’ll never be asked to do something like that.”

Tyler’s head flicked toward Jill and, though he had his sunglasses on, she could tell he was giving her a patronizing look, like she’d just said something stupid. Again. Then, as if deciding against saying whatever it was he had in mind, Tyler shook his head a little and stretched. “Babe, do you mind running to Dominion and grabbing some brats and burgers? I want to barbeque today.”

“I don’t think Dominion is open,” she said.

By the time they called a cab to take them downtown Tyler was stuporously patriotic. He’d shed his trunks and changed into a Molson t-shirt and cargo shorts. Jill applied a little rouge but that’s as far as she was willing to take it. She slipped 40 dollars into her jeans pocket and heard the barmp of the cabbie’s horn.

“Come on!” Tyler called from the porch.

The evening was warm and, oddly for St. John’s, still. The sun was inching towards Paradise, crowning the pine-clad hills. Tyler got into the front seat where he would chat with the cabbie, while Jill sat in the back and gazed through the window. How different Rabbittown looked in July, how vibrant, when only three months ago the whole city wore a cloak of shimmering white. Most complained about the weather, Tyler among them, but Jill thought they were blessed. Sure, summers were short, but they were lucky to experience all four seasons. Even if they weren’t balanced, she was glad to have the full breadth of what was on offer.

She’d heard Doris at work say that was how her husband had talked her into having Jaxxon; he’d said that he wanted to experience everything life had to offer, and raising a kid was a big part of that. This from a man who grew up in Kilbride and had never ventured further west than Gander. Doris loved him though, you could tell.

“We need to stop on The Dardanelles first,” Tyler told the cabbie.

“Mark and his buddy.”

The cab driver blew his horn before he’d even come to a stop. Mark and his friend crammed into the backseat, entering the cab on the same side Jill sat, making her slide over to her left and pressing her against the door. She was the only one of the three to buckle up and she had to dig under Mark’s ass to find the clip.

“I’ll catch up with you,” Jill shouted to Tyler when they stepped from the cab into the teeming bustle of George and Adelaide. She watched him and his new allies force their way through the sea of red bodies.

Jill walked to Harbour Drive, sat on the short retaining wall that ran along the back of The Murray Premises’ parking lot and texted Janette, Cindy and Fiona.

While she waited for responses she watched the revellers walking past, some in more obvious states of drunkenness than others. Two staggering young men approached along the sidewalk. They had that far-off look; that ready for violence glaze that is so easy to spot once you’ve been stung. She and Tyler had joked recently about how these pent-up drunk dudes were like wasps in September: clumsy, aggressive, confused, stunned; but if you let them be, gave them a wide enough berth and didn’t engage, usually they’d just leave you alone. That was Tyler’s take anyway. Jill didn’t think they were always so easy to avoid.

Cindy was the first to respond. She was in Mount Pearl at a house party. Her text message was soon followed by a photo of a schnauzer that had knocked over a beer bottle and was lapping up its prize.

Janette’s response wouldn’t come until the next day, she having been pushed into a swimming pool while still wearing her jeans.

Jill’s head went up and she searched all around, finally spotting Fiona walking down Adelaide Street.

“On the street with two of his buddies,” Jill said. “What are you up to?”

“Just dropping off some gear at The Levee. Renee and Vince are still there setting up.”

“What time do you guys play?”

“Probably around one. You should come! I’ll put your name on the door.”

Jill pulled out her ticket to the party on George Street. She was about to say “Maybe I should give this to someone” when her phone rang.

“Tell her to get her ass down here too,” Fiona said.

Jill silenced the phone and put it away. He probably forgot his wallet or spent all his money already.

“Tyler,” she said, shaking her head, rolling her eyes.

Fiona turned her hips away but not her shoulders, “You wanna come grab the merch bag at my place with me? Have a beer?”

They walked towards Fiona’s one room apartment above Nautical Nellie’s on Water Street. Jill felt the buzz of her phone ringing again in her pocket and pressed the button to decline without breaking stride. Upstairs, with the windows open, their voices were drowned by the reverberating sounds of motorcycles.

“What’d you guys do today?”

“Not much. Tyler drank beer in the kiddie pool,” Jill said. “I did too, I guess. But I really wanted to go to The Rooms this morning.”

“For the Beaumont Hamel thing? Yeah, me too.”

“What were you doing?”

Fiona nodded at the futon. “We played last night. I slept until almost one,” she said with a giggle.

“Let’s take a picture,” Jill said, taking out her phone. As she framed their faces and waited for focus Tyler’s name and number appeared again on the screen.

“Jill, this is Mark. Uh, you gotta come get Tyler.”

“What? Why?” Jill turned away from Fiona and plugged her other ear. Another Motorcycle roared by.

“You just gotta come get him. We’re in front of Green Sleeve’s.”

They downed their beers and Fiona zipped up the leather suitcase filled with t-shirts, CDs and vinyl.

When they got to the gate Jill was thankful she hadn’t given the ticket away. “Okay,” she said. “Have a good show if I don’t see you.” They hugged, the weight of the suitcase on the back of Jill’s thigh. “Say hi to Tyler for me.”

There was a lineup to get onto the street and while she queued Jill stretched and peered, trying to see around the crowd, trying to get some idea what was going on. The music from the main stage mixing with the music pouring out of the individual clubs created an offensive mess that kept Jill from being able to think.

Inside the gate she saw the strobing blue lights first, then the cop car. There was a crowd of people standing in a circle looking down at something. Mark stepped out of the group when he saw her approach.

“Ambulance is on the way,” he said.

“What?” Jill pushed through the circle and saw Tyler on the ground. His face was mostly red, there were teeth on the curb and both his eyes were swollen shut. “Tyler!”

An RNC constable put a hand on her shoulder, supposedly for comfort. The blue of his uniform flashed in sync with the strobing lights.

She heard Mark’s buddy from British Columbia say, “he put up a good fight.” 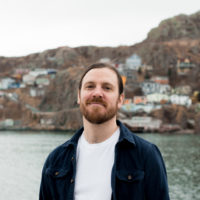 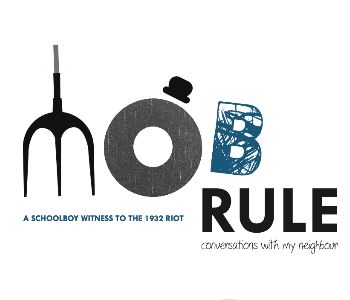 “They were clean, decent people… but they had no money”

THERE WERE a hundred ways to get home that didn’t involve walking past the Colonial Building. We didn’t take any of them. 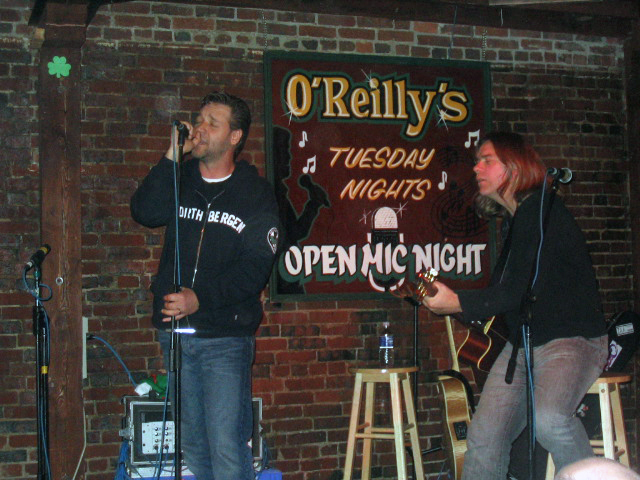 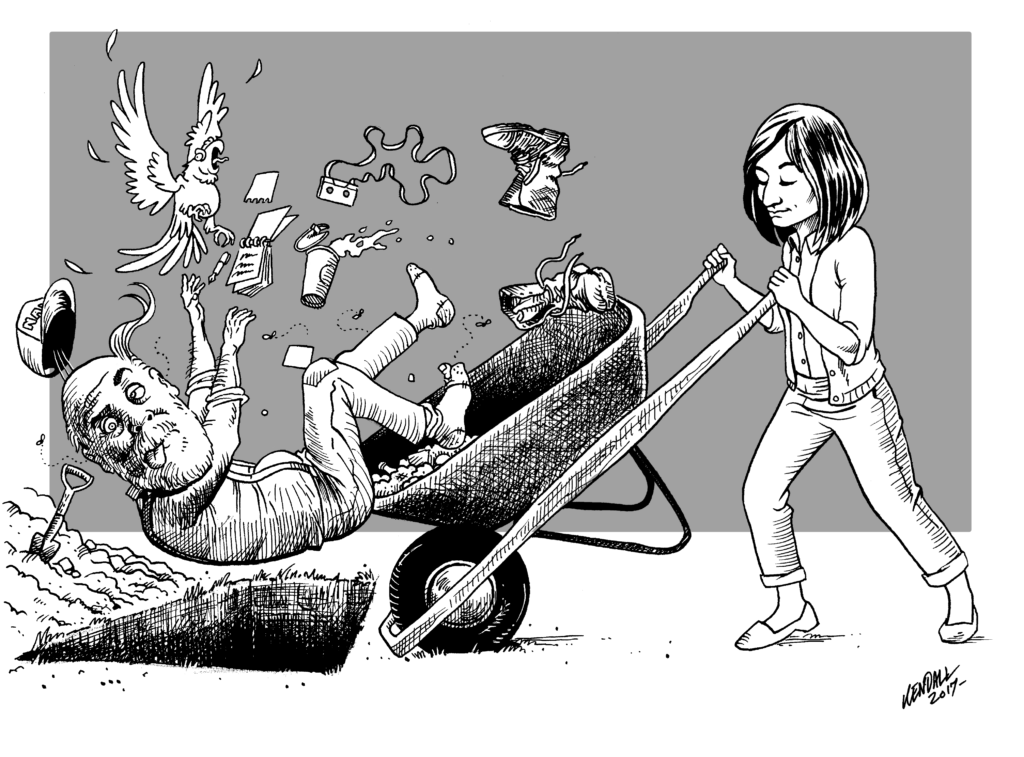 BUNKY COULDN’T ABIDE any of that sentimental claptrap.