Creativity in the Cold: Why the RPM Challenge has become an NL Tradition

February is a dark twenty-eight (or nine) days for anyone brave enough to weather it in Newfoundland and Labrador.

Trapped inside townhouses while squalls rage outside drafty windows – for most, it bears few worthwhile past-times. It’s often a period of routine and hibernation, with many of us tucked away, oblivious to the scattered social events happening outside our self-made nest of tea, a good book, and nowadays, a seemingly perpetual Netflix logo reflected onto our faces. 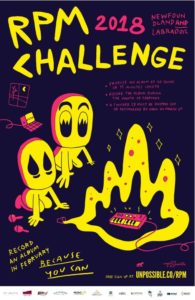 Each year brings a new poster, this time by José González.

It’s enough to sap the creativity out of you, really. And that’s a lot to be said about a place like Newfoundland and Labrador. A place so stubbornly creative and artistic that it’s built into the fabric of who we are. A traditional culture hinging on raconteurs and entertainers, kitchen parties and pub nights has helped to shape the identity of an island and has given each coming generation some semblance of a creative outlet. Music is the life-blood of our province, so how do musicians keep it flowing in the dreariest of days?

Well, for a few years now it’s been the RPM challenge. Originating from Portsmouth, NH, “Record Production Month” challenges anyone to create an album during the month of February. And not just finally record those songs you’ve meticulously crafted – no, the goal is to write, record, mix, and release either 10 songs or 35 minutes of material in that 28 day span. It’s not an easy task, but it’s apparently rewarding.

Many, many RPMs have flowed out of Newfoundland and Labrador musicians since it first started, over 1000 at last count. They range from bite sized lo-fi pieces to grander, finely tuned and produced fare that you would never expect borne from such arduous timelines.

RPM month may be the perfect reflection of that Newfoundland spirit – intense work ethic that still manages to explore and innovate. But as much as it’s filled a creative void in Newfoundland, it has also left a lasting mark. It has fed the ever-turbulent music scene longstanding acts, launched ECMA nominees (It Could Be Franky) given world class talent their debut, and, in particular, has led a move away from big budget musical investments into a much more sustainable and rewarding focus on grassroots production. 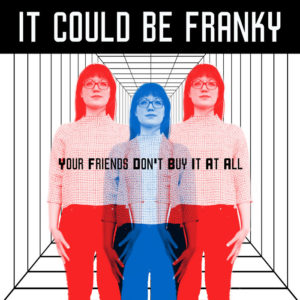 It Could be Franky’s debut was nominated for an ECMA.

The major label music industry has never made a whole lot of sense to Newfoundland. Outside of a few well known and well celebrated success stories, there are a hundred defeated and bruised for every bar on George Street. To get big is one thing – to simple survive is another. To subsist in a sort of musical middle class on original music and build up any sort of fanbase is nigh impossible when you float on a cold island in the middle of the North Atlantic.

First off, it’s basic economics: music isn’t the best paying profession, even if your name is readily recognizable. If you’re a full fledged band and you’re getting off this island, a solid couple of weeks of decent gigs might be able to feed you and pay travel costs. It’s prohibitive to base yourself out of here and it’s why we see so many talented folks pick up and move onto urban pastures.

These initial problems help to support a spiral: if musicians aren’t touring, they aren’t getting recognition. There are few eyes on here as a breeding ground for legitimate acts that can take it to the next level. Which is a shame, because I’ve seen so many come and go. That’s not to say there aren’t those doing everything they can to keep eyes on our artists: MusicNL does an admirable job at setting up opportunities for local artists, and there’s always the up-and-comers rearing to grab everything that comes their way: do every showcase, shake every hand, and fill out all the paperwork. There’s a lot of great and talented artists that do exactly this, and some of them give it a good go.

But the sheer bureaucracy takes its toll; there’s an ironic mistrust of the system. Leaping through all the hoops breeds discontent – a disconnect between the music and the business side. This is where the RPM challenge has begun to take make a difference.

As the realities of the modern music industry take hold and the already limited opportunities dwindle, RPM has served as a reinvigoration of that creative streak. Its prerogative is creation with only the faintest of rules. It brings us back to a yearning that is so ingrained in the province’s culture. It serves as a stepping stone for expression, as a way to relate to like-minded people, or as a gateway to the vibrant arts communities that prop up our province.

By asking everyone to simply make something, it has reminded us that art or music doesn’t have to be crafted merely for success.

It doesn’t have to have a papertrail.

You don’t need to spend thousands of dollars
in a studio.

Anyone can do it. 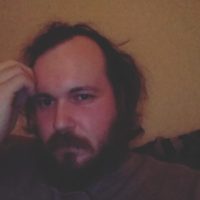 Brad Pretty is a writer, musician, and would-be troublemaker based out of St. John’s Newfoundland. 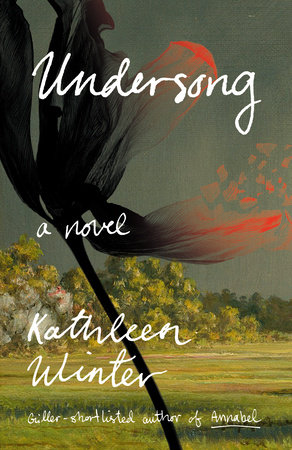 It’s not surprising that Kathleen Winter chose to write about the sister of the 19th-century poet William Wordsworth. She and Dorothy Wordsworth are kindred spirits, although born more than 180…

Our Fall Issue is Now On Stands!

Fall is here and so is a new print issue of Newfoundland Quarterly. The first thing you’ll notice is the beautiful painting on the cover. It’s a Jean Claude Roy…