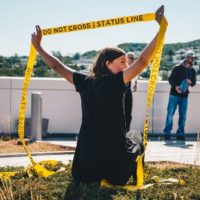 Quickly, we got talking about what it means to be fair-skinned, blue eyed and Indigenous. 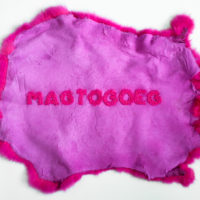 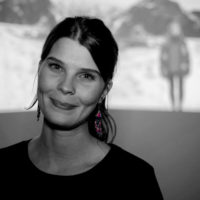 Meagan Musseau is an emerging interdisciplinary visual artist of Mi’kmaq, French and Irish ancestry from the Bay of Islands, Newfoundland and Labrador––Ktaqamkuk territory of Mi’kma’ki.

Through utilizing new media and traditional art mediums, such as sound and video, installation, performance, beadwork, sculpture, painting, and print media, she explores notions of identity, memory, language, and the relationship between land and narrative. As a way to centre her art practice around reclamation and self-determination, her process is research oriented and grounded by Indigenous methodologies and ways of knowing.

Musseau graduated with a BFA in Visual Art from Grenfell Campus Memorial University of Newfoundland and Labrador. Her work has shown nationally and abroad, in venues such as FLUX Media Art Gallery, Victoria; Open Space Artist-Run Centre, Victoria; U of S Gallery Two, Saskatoon; Grenfell Art Gallery, Corner Brook; and University of Brighton Gallery, England. She is a member of the Indigenous Emerging Artist Program and The Indigenous Artist Collective on Lekwungen Territory––Victoria, BC. Musseau received a 2016 Aboriginal Art Development Award from the First Peoples’ Cultural Council and a 2017 Inter-Arts project grant from the Canada Council for the Arts.