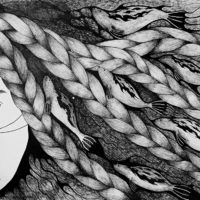 Though introduced to the arts at a young age, Jason has no formal training in the field. Jason’s love of art began watching his uncle, Jack Mugford, as a child.... 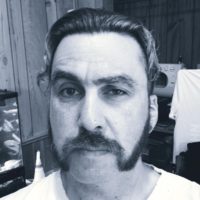 Though introduced to the arts at a young age, Jason has no formal training in the field. Jason’s love of art began watching his uncle, Jack Mugford, as a child. Wishing he could command the materials as his uncle did, Jason vowed to learn as much as he could.

Evolving an artistic style that is all his own, he started with using materials at hand. First in wood like his uncle, paper and pencil as it became available: stone, bone and antler later in life. Pen and ink is now his main medium.

Subject matter varies, depending on the day, maybe mood based or inspired by world events. He tries to render his interpretation of Inuit life, Inuit hardship, and spirituality on paper.

At times his work is very controversial, but he would have it no other way. He believes that if his controversial work challenges those who view his work to think, ask questions and maybe learn a little he has succeeded.

The greater part of his work as of late has been just that, trying to tell everyone that he believes that where we are today as Inuit, would be very different if we were not influenced by a foreign group or spiritual belief.

Our own language, culture and spirituality would be a very important part of our lives, our fight to keep what we have would not exist and maybe have a much easier lot in life. He believes that if things were this way he would have a better idea of self and have a feeling of being whole.