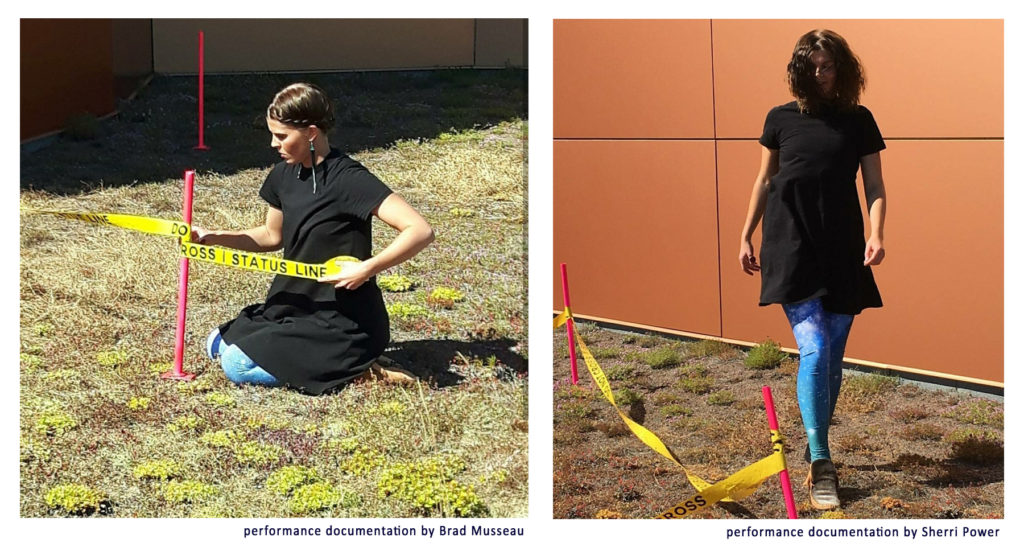 THE MEDICINES AND POWER shared between two Mi’kmaq women can transform generations.

Yet, we realized this could be problematic, and potentially a means of appropriation.

“Making work here means shifting through a difficult history that deemed us Mi’kmaq people as not even existing.” – Meagan Musseau

In turn, we came to the conclusion that our great-grandmothers would be thrilled to know we’ve connected in this lifetime, and their ancestral legacies live through us in our work as artists. And so, we decided on this–a conversation with each other.

Meagan and I met at Petapan First Light Indigenous Art Symposium in Dieppe, New Brunswick just before Summer Solstice last year. We were drawn to one another immediately–there was something familiar, a kinship found in her features that felt like home. Quickly, we got talking about what it means to be fair-skinned, blue eyed and Indigenous. We talked about Qalipu Mi’kmaq First Nation, and the problematic issues facing status and non-status members. Her film, “Made in Ktaqamkuk,” screened with my short video-poem, “Harvest Your Heart,” and our artistic sisterhood evolved from there.

Since I’ve left Newfoundland to finish my forthcoming poetry collection, Who Took My Sister? (Book Thug, 2018) in Montreal, Meagan has return to her ancestral lands in Bay St. George and the Humber Arm of the Bay of Islands, to create a new body of work funded by the Canada Council for the Arts.

Webb-Campbell: Can you tell me a bit about the inspiration behind DO NOT CROSS | STATUS LINE?

Musseau: DO NOT CROSS | STATUS LINE seeks to provoke and unsettle the tensions that exist between recognition, or lack thereof, under the Indian Act. This performance piece is a personal and critical reflection of belonging to Ktaqamkukewaq through colonial expectations of identification and is intended to open dialogue about access to resources, most importantly to the land which is intrinsically linked to identity and lifeways of a people. With the formation of the Qalipu Band as a landless band, the membership forfeit claim to lands and resources, DO NOT CROSS | STATUS LINE acknowledges the difficulties that exist for Ktaqamkukewaq Mi’kmaq (the Mi’kmaq people of Newfoundland) in self-determination and sovereignty while the federal Canadian State owns land, resources, and ultimately controls who is and who is not an “Indian.” 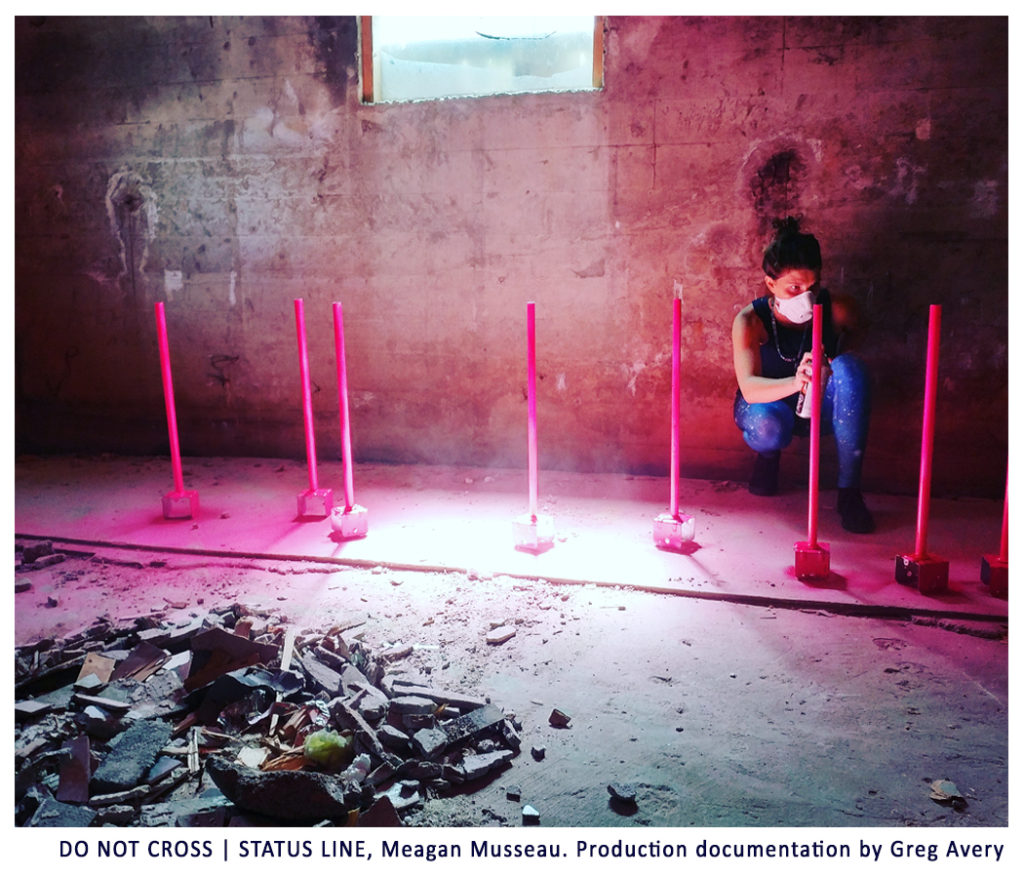 This performance piece took place on the roof top garden of the City Hall in Corner Brook. It’s inspired by my ancestors, “Beyond Blood Rethinking Indigenous Identity” by Mi’kmaw lawyer Pamela D. Palmater, and “Enduring Pasts and Denied Presence: Mi’kmaw Challenges to Continued Marginalization in Western Newfoundland,” an article by anthropologist Angela Robinson.

Webb-Campbell: You’ve lived away from Newfoundland in Victoria, British Columbia, for a few years. How did the experience of living on the mainland shape your work as an Indigenous artist?

Musseau: In 2014, I moved from Western Newfoundland, and it was the best thing I could have done for my personal and artistic growth as a Mi’kmaw woman. The first day I wandered into Open Space artist-run centre in Victoria, the Aboriginal curator in residence, France Trépanier, gave me a big hug and spent time talking with me. Her acceptance and generosity shaped the path I am walking today. She motivated me when I was so far from home with an invitation to join the Indigenous Emerging Artist Program. This was the first time I felt comfortable speaking about being Mi’kmaq from Ktaqamkuk.

The program challenged me in such a real way. Every Sunday our group would meet to share and make art with mentors. The session with James Luna sparked big inspiration for the new media installation “Made in Ktaqamkuk”. From there, France suggested I apply for a grant, and in 2016 I received an Aboriginal Arts Development Award from the First Peoples’ Cultural Council in partnership with the BC Arts Council. This made me feel like I could make a go at being a practicing artist, and I’ve been working really hard ever since.

All these experiences shaped my understanding that my identity is more than a status card. I don’t need that card to acknowledge my Indigeneity. I carry my ancestors with me all the time – they are my shadow. When I make my work they speak.

Webb-Campbell: What does it mean to make work in Newfoundland as an Indigenous person? How does the land inform your work?

Musseau: It’s difficult. It’s important. It’s real. Making work here means shifting through a difficult history that deemed us Mi’kmaq people as not even existing. I am constantly inspired by the people who stand up for our rights, the people living on this land and those buried in the ground. I visit elders and gravesites often, and doing so helps me to trust in my path and to achieve healthy life ways. It’s easy to get caught up in politics and negativity, but I push through it because my family carries such resilience. The land informs my work every day. The best way I can describe it is being fully in tune with your instincts and the environment. By allowing those instincts to guide, you can successfully move through a territory with intention, honesty, and integrity. I approach my work in the same way.

Musseau: Currently, I’m in the research phase of an Inter-Arts project funded by the Canada Council for the Arts which focuses on the Indigenous history of Ktaqamkuk. This research will result in the creation of a land-based installation, beaded rabbit furs, photographs, and a video. As a resident artist at the Rotary Arts Centre in Corner Brook, I am focusing on community engagement, conversation, and personal reflection. I recently gave an artist talk, titled “indigeneity, inter-media, and land-based practice” and produced a performance art piece, titled “DO NOT CROSS | STATUS LINE.” I’m heading to Saint John, New Brunswick, in August for an artist residency at Third Space artist-run centre for the Thirdshift event to do appliqué beadwork on a seal skin. 2017 has been extremely rewarding, I put a lot of work into residency and exhibition applications over the past two months, so now my prayers are focused on 2018.

“When I wear this piece I carry the wisdom of my ancestors and hold a responsibility to listen and activate my voice. That’s my status card. I’ll pass it on one day.” – Meagan Musseau

Webb-Campbell: Your great-grandmother Julian Young (LeJeune) was born at Main River in the Gut of Bay St. George in 1898, and married Benjamin Musseau from Mouse Island, Port Aux Basque, as they settled in Curling on Musseau’s Avenue. And my great-grand grandmother Mary Webb was born in the Codroy Valley in 1881, and married John Webb in Flat Bay in 1903, and later became a mid-wife, and healer to the communities around Bay St. George. The legacies our great-grandmothers have left behind resound. How do you see Julian’s legacy passed on through the generations, and/or in your work?

Musseau: This is a beautiful question, Shannon. Mary and Julian walked dangerous ground to pave the paths we are on today, and I know our great-grandmothers knew each other from their time in Bay St. George. I believe this because of the familiarity in our ocean blue eyes, our strength, and the support we share for each other’s artistic paths. I hear many stories from my grandmother, aunts and uncles about Julian. She was a very silent woman–often afraid to speak–but she channeled that through the love for her nine children.

One of her children was my grandfather, George Musseau, and I spent a lot of time with him when I was little. He was short and dark, he had one blue eye and one brown eye, and we’d sit in silence or he would tell me stories by mumbling under his breath. I was eleven when he passed. That was the first time I experienced death. I know he passed on something to me–the spirit of his mother. Julian’s spirit pushes me to speak words once unspoken and to reclaim our identity in a very real way. When I make my work, I’m not afraid to speak because I know my great-grandmother and grandfather have got my back.

I made a large beadwork pendant called “Niskamij” which means grandfather, while thinking and dreaming about them when I was producing work for my first grant. That’s what I call transcendence. When I wear this piece I carry the wisdom of my ancestors and hold a responsibility to listen and activate my voice. That’s my status card. I’ll pass it on one day. 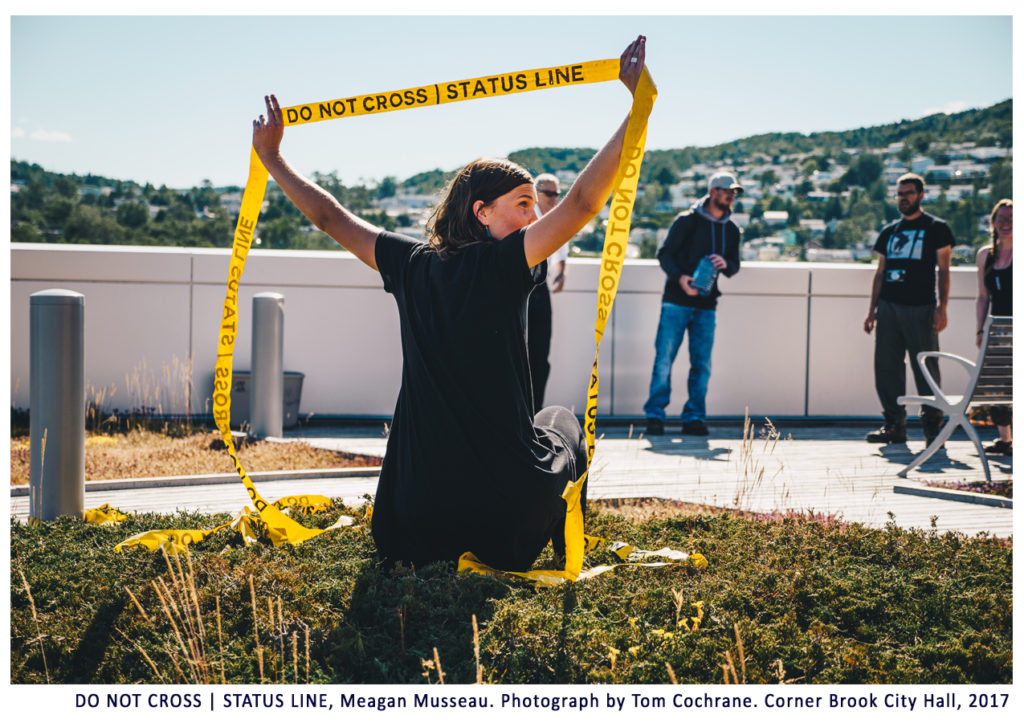 Meagan Musseau and Shannon Webb-Campbell collaborated in this visual and textual conversation about the public and personal politics of Indigenous status. 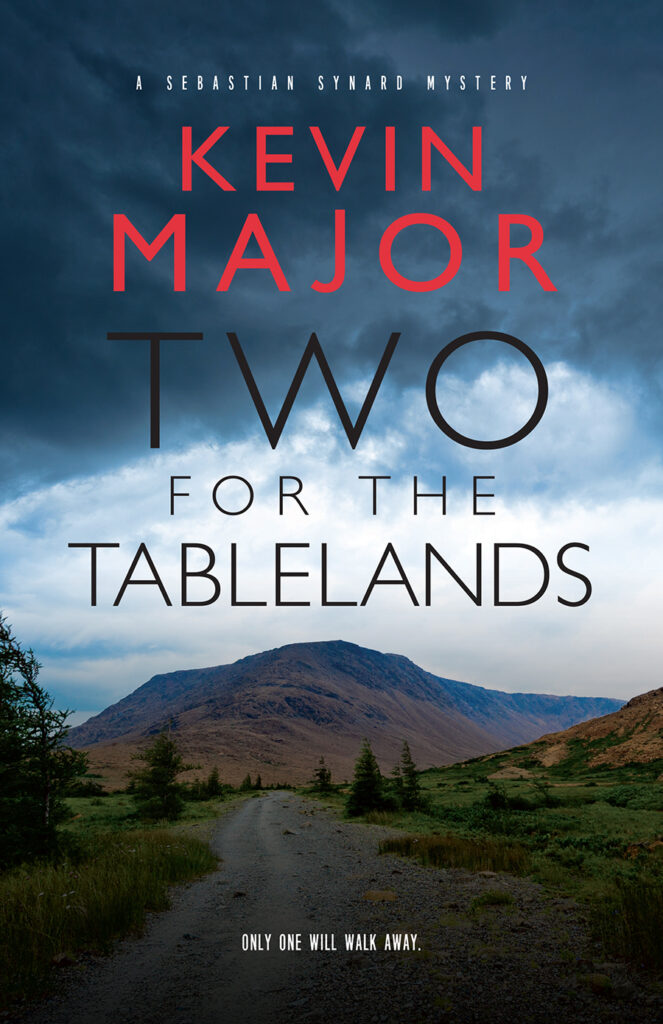